A statement from the #MuslimWorldLeague 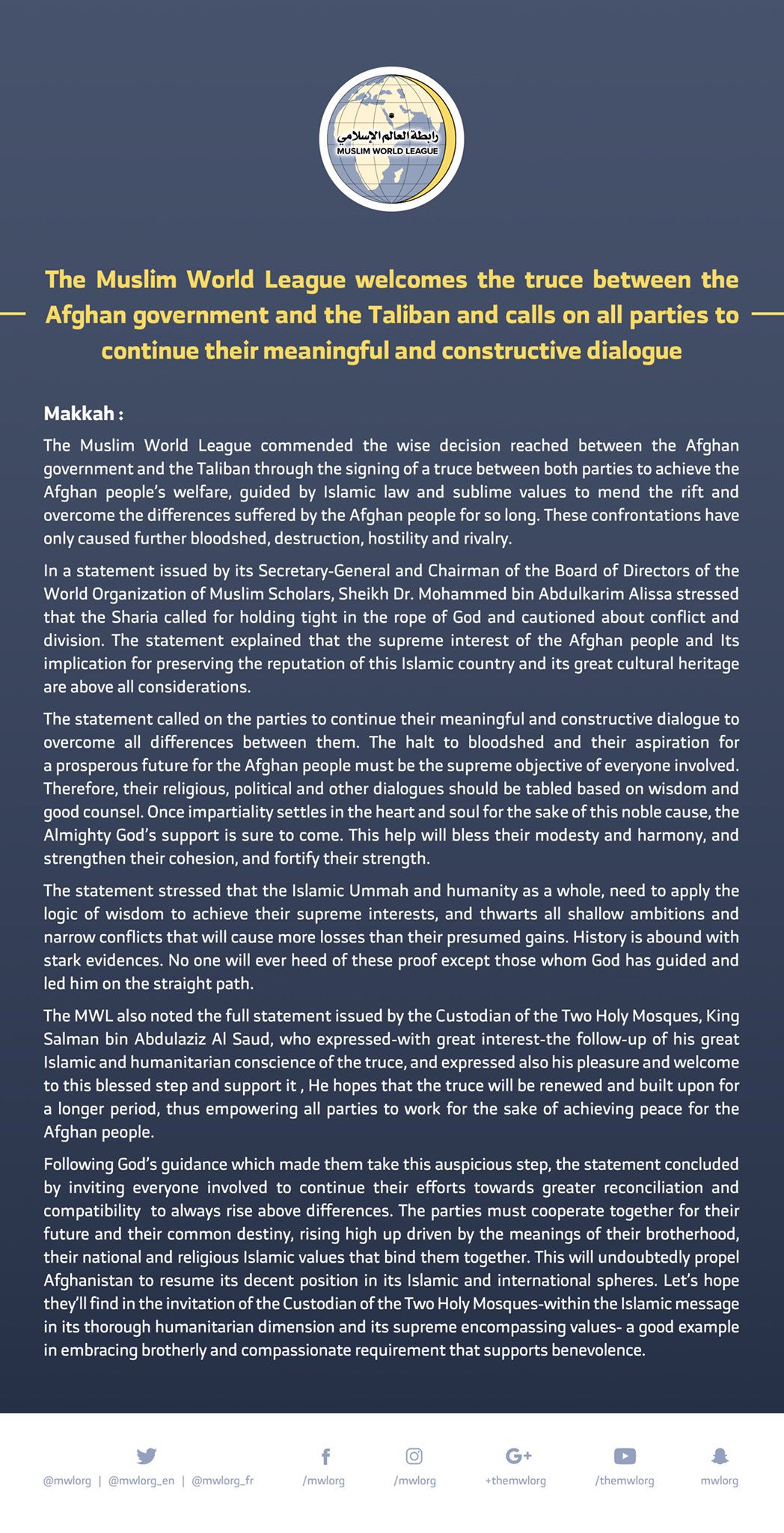 Makkah:
The Muslim World League commended the wise decision reached between the Afghan government and the Taliban through the signing of a truce between both parties to achieve the Afghan people’s welfare, guided by Islamic law and sublime values to mend the rift and overcome the differences suffered by the Afghan people for so long. These confrontations have only caused further bloodshed, destruction, hostility and rivalry.
In a statement issued by its Secretary-General and Chairman of the Board of Directors of the World Organization of Muslim Scholars, Sheikh Dr. Mohammed bin Abdulkarim Alissa stressed that the Sharia called for holding tight in the rope of God and cautioned about conflict and division. The statement explained that the supreme interest of the Afghan people and Its implication for preserving the reputation of this Islamic country and its great cultural heritage are above all considerations.
The statement called on the parties to continue their meaningful and constructive dialogue to overcome all differences between them. The halt to bloodshed and their aspiration for a prosperous future for the Afghan people must be the supreme objective of everyone involved. Therefore, their religious, political and other dialogues should be tabled based on wisdom and good counsel. Once impartiality settles in the heart and soul for the sake of this noble cause, the Almighty God’s support is sure to come. This help will bless their modesty and harmony, and strengthen their cohesion, and fortify their strength.
The statement stressed that the Islamic Ummah and humanity as a whole, need to apply the logic of wisdom to achieve their supreme interests, and thwarts all shallow ambitions and narrow conflicts that will cause more losses than their presumed gains. History is abound with stark evidences. No one will ever heed of these proof except those whom God has guided and led him on the straight path.
The MWL also noted the full statement issued by the Custodian of the Two Holy Mosques, King Salman bin Abdulaziz Al Saud, who expressed-with great interest-the follow-up of his great Islamic and humanitarian conscience of the truce, and expressed also his pleasure and welcome to this blessed step and support it , He hopes that the truce will be renewed and built upon for a longer period, thus empowering all parties to work for the sake of achieving peace for the Afghan people.
Following God’s guidance which made them take this auspicious step, the statement concluded by inviting everyone involved to continue their efforts towards greater reconciliation and compatibility  to always rise above differences. The parties must cooperate together for their future and their common destiny, rising high up driven by the meanings of their brotherhood, their national and religious Islamic values that bind them together. This will undoubtedly propel Afghanistan to resume its decent position in its Islamic and international spheres. Let’s hope they’ll find in the invitation of the Custodian of the Two Holy Mosques-within the Islamic message in its thorough humanitarian dimension and its supreme encompassing values- a good example in embracing brotherly and compassionate requirement that supports benevolence.